Six Flags Fright Fest is a seasonal event in October offered by FunEx.

Six Flags Magic Mountain is here to give you a fright-tastic time with Six Flags Fright Fest!

Find yourself in the middle of 14 electrifying mazes and dare-to-enter scare zones with nightmarish zombies lurking around every corner! Not only that, in Six Flags Fright Fest, riders will be left to face their fears in total darkness (lights off – confirmed) aboard monster coasters in the park!

Watch out for two new shows, and two new scare zones with unexpected, dark surprises around every corner! 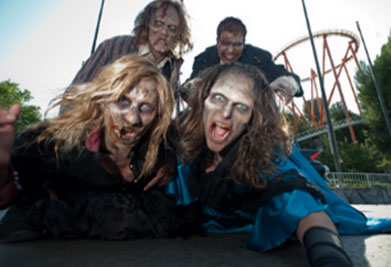 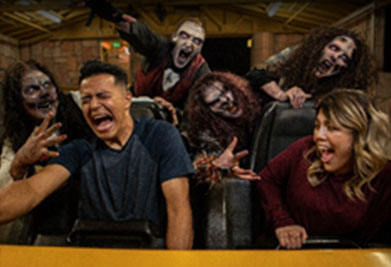 Along with The Deadzone and Terror Rising – Dark Developments, six additional scare zones around the park leave guests nowhere to hide and screaming to get out unscathed. They include:

Spooktacular shows in Six Flags Fright Fest include the new Grave Games located in the Golden Bear Plaza and Dark Minds in the Gearworks Theater, the ghoulish Sliders of the Night show in DC UNIVERSE™, plus the very popular VooDoo Nights, where ghoul rock goes pop with today’s hits. Guests will want to dust off those thriller moves and join in the fun in the Full Throttle Plaza.

Guests can literally face their fears in the shadows when the lights go out on some of the park’s iconic coasters during Fright Fest, including Twisted Colossus, Viper, X2, Scream, Goliath, Apocalypse, and more.

For the little monsters, a Trick-or-Treat Trail and Halloween crafts round out the frightfully fun family activities during the day.

Our company guarantees to give you discounted tickets to your favorite attractions at the best price. For the past 30 years, we have offered the cheapest tickets and passes possible and great corporate benefits to thousands of companies. Buy your tickets now to enjoy the biggest discounts in the industry!

Here’s the perfect part: company sign up and individual registration are totally free with your employee access code (EAC) or with your work email address. Yes, reading that again will not change the words. It is free! After registration, you can enjoy huge discounts on theme parks, water parks, museums, zoos, aquariums, and outdoor and indoor adventures!